Guidebook is the most popular app choice for anime and fan conventions of all sizes. In the US, Guidebook has worked with over 30 anime conventions, including AnimeNEXT, Sakura-Con, Ushicon, and Anime Expo. Learn how Anime Expo and Nan Desu Kan used Guidebook to help fans maximize their time at a con, and stay in-the-loop on critical updates.

Fan conventions: a labor of love

What makes a fan convention a success? According to Scott Peterson, Nan Desu Kan’s Director of AMVs and Storage and its mobile app guru, “Did anything really terrible happen? Did any fights break out? If not – then we probably had a good show!”

A successful con is primarily about pleasing the fans, and bringing them together to have a worthwhile, enjoyable experience. For many conventions, majority of the board members and staff are volunteers – typically fans themselves that want to share joy and expand their communities. If you’ve ever attended a con yourself, you know the rush of excitement that comes with so many awesome things happening at the same time. 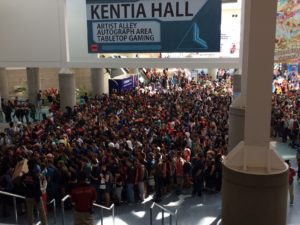 Fans lining up at Anime Expo

This is where an app can truly benefit attendees. It lets you easily search through the agenda, pick the sessions you’re interested in, and set timed reminders. Anime Expo, the largest North American anime convention, has been using Guidebook since 2011. This year they had over 100,000 unique attendees. While thrilling, the sheer amount of available programming can also be daunting. Denise Yap, who attended Anime Expo this year, shares, “In cons, lining up is very important – I need to know the exact time and information about events to plan my day.

AX has an overwhelming amount of things to do, so the app helps me narrow down what I want to see and gives me the ability to customize my schedule. The reminders are super important so I know when to line up and where I need to be.”

What about the printed program? While it’s a great souvenir item, especially for exclusive artwork and articles, “It can be frustrating to flip through in a space as crowded as AX,” Denise explains. “It also has a lot of ads and artwork, so it can be hard to find the information I want.” The most important difference, however, is in how up-to-date the information is. As Denise shares, “The app is really useful because I want to get into certain panels and obtain autographs. If those are moved to a different location, the app can be updated, but the paper guide can’t be changed.” Unlike paper, an app can be updated instantly and thus provides the most accurate source-of-truth for attendees.

Herding cats: the life of a con volunteer

Generally, con information tends to come in at the last minute. Special guests often sign on close to the deadline – 2-3 weeks before the event. While these announcements generate a lot of social media buzz, it can cause stress for the con committee who must ensure that staff is well-informed (so that attendees, in turn, are well-informed). Even right before the show starts, con staff tend to receive several infodumps about changes – which is hard for them to keep in mind once the gates open!

No one likes these changes, but they are unavoidable. The app provides an easy way for the con to alert users and bridge that communication gap. Scott shares: “We try to stick to the schedule as much as we can, but if attendees want the most up-to-date information, they need to check the Guidebook app.”

Last-minute updates were easier to push through this year thanks to Mobile Admin: an industry-first feature that allows an event organizer to send announcements and edit the schedule right from their mobile phones. Event organizers are always busy, so any features that can save time are valuable.

“With Mobile Admin, changes took two minutes at best per update – primarily based on how organized the information is when I receive it.”

In addition to a straightforward content management system, Guidebook offers the ability to clone an existing app to easily replicate layout and content. This was a major bonus for Scott: “Cloning saved us so much time! Using that tool, it took us maybe seven hours to update and modify the content of our app this year.”

Think of the fans first

When asked about why they initially decided to introduce an app to the con back in 2012, Scott shared that the Nan Desu Kan team had noticed the popularity of smartphone apps. They tried building their own app, but this proved to be difficult so they halted development. In Guidebook, they found an easy starting point for giving mobile technology a try. “We have a fairly young demographic at the moment, and most of them are on smartphones. We expect the proportion of our audience who uses smart devices to grow in the future.”

One thing to keep in mind when it comes to fan conventions is that modest download rates may not communicate the full story. Typically, families and groups of friends attend a convention together – so it only takes one device (and one app download!) to align the schedules of multiple individuals.

In 2016, Nan Desu Kan’s app received 1000+ downloads. This generated over 470 hours of total engagement with the app. On average, each user opened the app six times and spent nearly 30 minutes using it across 3 days.

As Nan Desu Kan has continued to improve its convention, they’ve maintained the app as a valuable resource to attendees. When asked if he had any tips for people hoping to deploy an app at their con, Scott said, “Try to communicate with as many department heads as you can, and stay appraised of all changes. Make sure to plan out the marketing and include it in your communications – this is something con coms can always do better.” 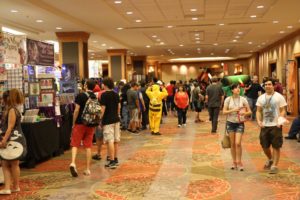 Guidebook isn’t exclusive to anime cons – in fact, it powers fan events of all sizes and across different genres. MineCon, EGX, Walker Stalker Con, Fan Expo Canada, and Star Wars Celebration are just some of the lively genre and pop culture events that Guidebook has been part of. We’re eager to continue helping fans and volunteers alike, and are constantly innovating our product to bring people together more than ever. If you’d like to build your own fan expo app, get started here!