Creativity is never taken for granted at Mindshare, one of the UK’s leading media planning and buying agencies. Their business is built on it, and it infuses every aspect of their strategy. It’s no surprise then that Mindshare hosts the industry’s foremost festival of ideas, collaboration and entrepreneurship – Huddle.

Huddle is an unconference. You won’t find presenters or Powerpoint decks here. It’s all about participation. From planning the day itself, Huddle is curated entirely by its participants and, as a result, focuses on the conversations and topics they want to explore most. In their words, “Not navel gazing, but stargazing.”

The end of analog

An unconference of this size (Huddle now attracts 1500 participants on the day) comes with a number of logistical considerations, not least because of the varying Huddle sizes and formats. There are roundtable Huddles and Huddle hacks of just ten or fifteen people and then there are panel Huddles with 100 participants. Registration for these takes place on the morning of the event. And until this year, the process has been what Director of Marketing for Mindshare UK Louise Richardson politely describes as “analog.” Imagine Huddlers rushing to mark their names on paper sign-up sheets and you get the idea.

To do a bit of converting from analog to digital, Louise – along with Marketing Manager Charlotte Raven – began to look into mobile app solutions for Huddle. The key, however, was that it needed to serve two purposes.

First of all, it needed to improve the overall participant experience. This meant features like interactive venue maps, integrated social media, the ability to push messages to participants and to display Huddler bios. Louise and Charlotte weren’t really having trouble finding a range of companies that could deliver on these features.

The deciding factor, however, was that the app needed the ability to manage Huddle’s unique brand of real-time registration. They were looking for a solution, housed in the app, which could enforce each Huddle’s limited attendance cap. It was that requirement that was causing the search team some consternation – until they found Guidebook.

In the moment solutions

Guidebook was able to provide Mindshare all the standard benefits of an event app whilst offering real-time registration that completely eliminated paper, pencils and potentially disappointed Huddlers from the process. Guidebook’s Session Attendance feature allows any organiser to set an attendance limit per session while allowing participants to add those sessions to their personal schedules and provide real-time feedback on the session’s availability.

“It worked really well,” said Louise. “It meant participants were able to network and soak up the atmosphere, rather than stand in a long queue, only to find out that their chosen Huddles had already sold out.” 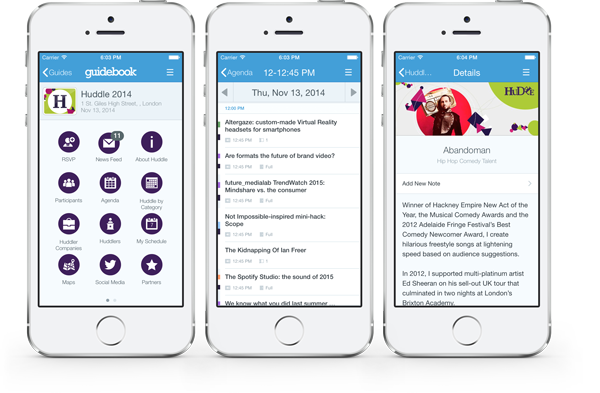 What Charlotte and Louise loved about Guidebook’s registration was that it didn’t detract from the “scrappy” feeling of the event at all. In fact, the ability to register for Huddles from within the app created a palpable buzz in the room.

“People were standing there with their phones ready to go,” said Louise. It also boosted a healthy sense of competition among Huddlers that only added to the spiritedness of the day. “It felt a little bit like when Glastonbury tickets go on sale. People were getting quite excited.”

Beyond an elegant solution for Huddle’s registration needs, the Guidebook app also helped give the event an appealing digital flair. In the past few years, Huddle has grown significantly in attendance. While certain aspects, like the old registration system, may not have been scalable, it was important to Louise to continue to innovate without losing Huddle’s feel.

“Huddle has outgrown the fact that it’s an agency event. It’s now an industry event. It stands alone. The app did a lot to say ‘we’ve arrived.’ It lent an air of authority to what was a scrappy, homemade event.” And thanks to Guidebook’s ability to brand the features of the app with Huddle’s look and feel, it did so in a familiar way.

The team at Mindshare worked hand in hand with the team at Guidebook to make the app a reality. Charlotte says she felt excellently supported. “We were so impressed by the response rate from Guidebook. There’s always a bit of fear and anticipation whenever you’re doing something for the first time, but Guidebook were always at the other end of the phone. They were an absolute pleasure to work with.”

Mindshare was given a dedicated Guidebuilder, Isabel, to help build the app and make the most of its features. Charlotte says, “It felt like a genuine partnership between ourselves and Guidebook. They steered us throughout the whole process, whilst also giving us the freedom and flexibility to make the app our own.”

As for next year’s Huddle, Louise and Charlotte are already formulating plans for how to further take advantage of Gudiebook’s technology. They’ve even been fielding inquiries from their client participants who were impressed with the app and considering one of their own.

“The ability to adapt the app for our own purpose is what makes it exciting. It means there’s so much more we can do with it and we’ve already got new ideas for next year,” says Charlotte.