Let’s say you’re really trying to make an impression on your attendees this year. Like – an indelible mark on their memories. Where do you look for the most original live event entertainment ideas?

Today we’re playing the part of booking agent, and we’ve taken care of narrowing the search for you. You can thank us when your attendees are wildly leaping to their feet in a rousing standing ovation at your next event.

This is a real deal. Imagine when you present this value proposition to your boss – the wait staff is the entertainment. Riffing on the old belief that all struggling artists are also waiters, The Three Waiters know the way to your heart – food and operatic standards.

Simply known as “Christopher” or “Christopher Dance-Puppeteer,” this nimble performer brings his own dance crew with him wherever he goes. Just give him a 20-foot radius and set him loose!

If you had dumped sand all over your overhead projector in school, you would have gotten detention. Joe Castillo tried it and launched an international performing career! It’s truly mesmerizing to watch Joe transform shapes and tell stories before your very eyes with only some sand and his hands.

Ever listened to your favorite 80’s funk rock band and thought, “This needs more bagpipes!”? Apparently that’s what these skirted lads did and, unlike many of us who would have dismissed the idea as a fleeting fancy, created a Scottish sensation. 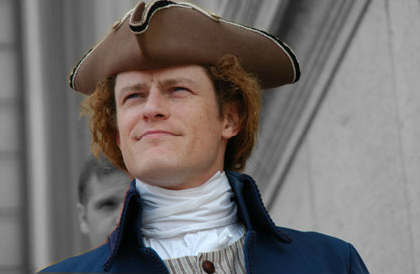 Go ahead and party like it’s 1776 with one of America’s founding fathers. Steven provides the works when it comes to Jefferson – colonial attire, a killer presidential ponytail, and lively discourse from the perspective of our third president.

Robot Dance Party is a Bay Area legend in the making. He shows up anywhere – from epic underground parties to lazy Sundays in Dolores Park. Wherever he is, this walking boombox is pounding sweet jams and bringing big smiles.

If Robot Dance Party went on a fire-fueled rampage, you’d end up with Pyrobot. Some mad scientist couldn’t resist packing his creation with every special effect known to man. Lasers, fireworks, and stilted dance moves – it’s like the killer robot version of your senior prom date.

We all love Elvis. We all love Neil Diamond. Those are givens. What if I told you there’s a man who can bring you the best of both worlds in one show? That man is “Diamond” Doug James. His act is scientifically proven to be the most pleasing of any rock and roll mashup ever created.

Keep attendees on their toes as they stroll around your next garden party mixer. Nothing sparks conversation like the terrifying feeling that the shrubbery will come alive and eat your shrimp skewer.

It’s an ancient art – and always guaranteed to impress. The great news is, sword swallowers formed their own association so it should be easy to find one near you. I wonder what their professional development sessions are like at their annual conference.

At Guidebook, we do all the tough thinking so you don’t have to. Subscribe to our blog so you can get fun stuff (like this) and serious stuff (like the steps to becoming a CMP) all in your inbox.