4 Major Event Fails (And How They Were Spun)

Super Bowl XLVII – the Baltimore Ravens take home the title of World Champions over the San Francisco 49ers. But thanks to a 34-minute power outage, the world is more likely to remember the 2013 Super Bowl for a bizarre blackout rather than any triumphs on the field. 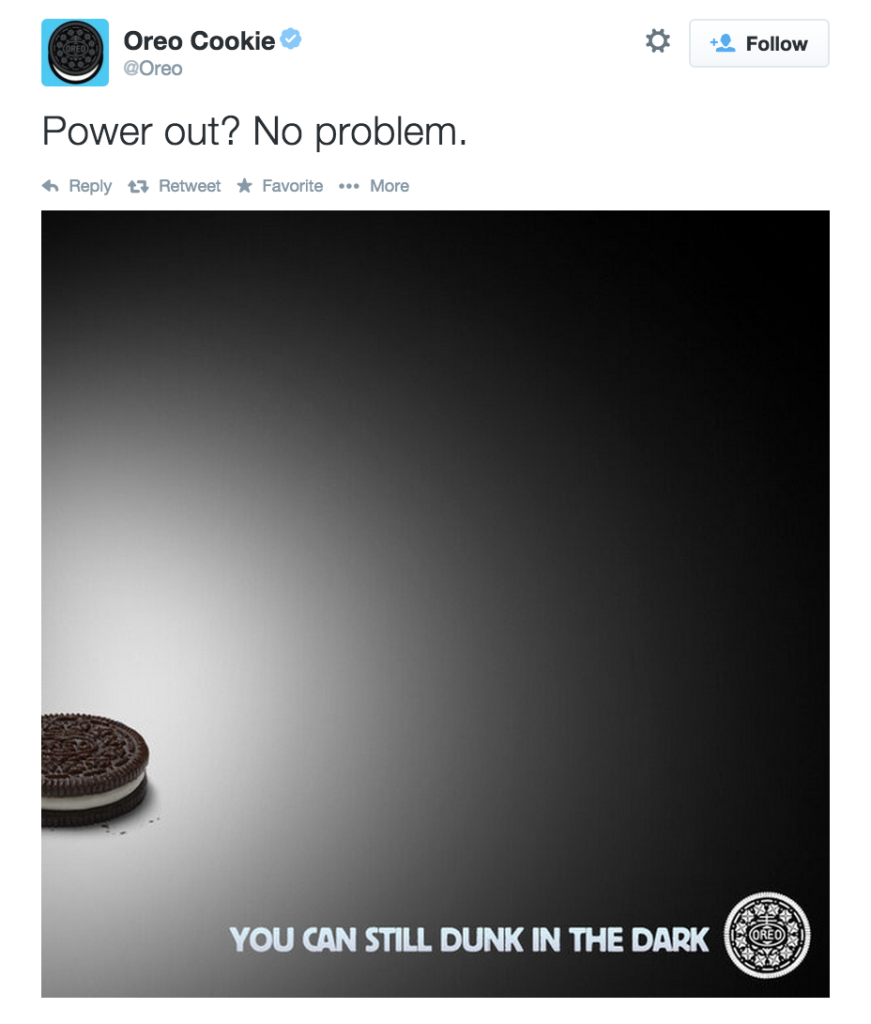 While the players (and pretty much the world) were left scratching their heads, Oreo jumped at the opportunity to land a witty tweet that went on to win the Super Bowl. 525 million earned media impressions later, Adweek ended up ranking it one of the top five ads of the night – making it the cheapest Super Bowl spot ever ($0). How’s that for some ROI? Never underestimate the power of having a sense of humor. Now if only we all had a premiere ad agency and a war room of brand executives standing by to write our jokes…

The 86th Academy Awards – John Travolta looks straight into the camera to introduce the woman who will sing the song that every child under the age of 12 (okay – maybe under the age of 35) has adopted as their personal anthem. “Please welcome, the wik-id-ly talented…” Whoops. He knew right there he had blown the line reading and the wheels began to churn. But still, he had to march on. The world was watching! “The one and only – Adele Dazeem.”

Did he just say what I thought he said? Who the $%&# is Adele Dazeem?

The Spin: Roll With It

Anyone who had been paying attention was baffled. Idina Menzel was no Barbra Streisand – but she’d starred in some of the biggest musicals in the history of Broadway. Well if ‘Let It Go’ wasn’t about to rocket her to the stratosphere of superstardom – John Travolta’s twisted tongue sure did. A fake Playbill insert and a photoshopped marquee surfaced online not long after, listing Adele Dazeem as the star of Menzel’s about-to-open Broadway show, If/Then. She had a good public laugh, and ticket sales for the world premiere musical went through the roof.

How can we game this system? Hire John Travolta to introduce your next keynote speaker?

The Macy’s Thanksgiving Day parade is a joyous family-friendly occasion that both parents and children can look forward to each holiday season.

That is, until little Timmy’s favorite purple dinosaur is disemboweled when raging winds send him flying directly into a street lamp. In 1997, that was the terrifying scene. Vicious winds had already taken down The Cat in the Hat and later the Pink Panther was put out of his misery by anxious police before he could hurt any innocent spectators. Little was left to to the imagination as balloon handlers and police wrestled the fuschia fossil to the pavement of 51st Street, stabbing various appendages in order to release the 20,000 cubic feet of helium causing him to put up an impressive fight. At the end of the day, all that remained was a purple parachute.

The snafu ended up to be no laughing matter, with Dr. Seuss’ feline friend causing several serious injuries. In 2013, however, Macy’s was facing some disappointed parade-goers when high winds were threatening to ground the likes of Spongebob and Snoopy. Spokespeople made no hesitation to let media outlets know that they had learned from the events of 1997, citing their ability to walk balloons at different heights depending on weather, an increase in the number of handlers, and a renewed to commitment to always err on the side of safety.

Watching the opening ceremonies of any olympics is like living in a fever dream. Thousands of participants dance and sing in historical costumes while obscure national symbols slowly float around and the world’s elite athletes take a leisurely stroll for three or four hours. And we love it. The Sochi opening ceremonies were no different, and as the world luxuriated in its shared Russian hallucination, we all leaned forward and said “I don’t think that’s supposed to happen” as lighted starbursts expanded to create that beloved international symbol – the Olympic rings. Kind of. Four of them did. The other one just kind of sat there.

It couldn’t have been easy for Vladimir Putin, a man of well-documented pride, to witness such a blatant fail while the world pointed and laughed. Sochi had been receiving such bad press leading up to the games that an incomplete symbol of harmony with a glaring asterisk beside it was the last thing the national leader wanted.

The Spin: Go Forth and Dominate

It ends up that the perturbed Putin got his last laugh when it came to Sochi. Russia dominated in the medal count claiming 33 total medals – 5 more than America, its closest competitor. Russia also took home the most gold medals of any nation, as if to say, “What opening ceremony?”

Maybe the best way to cover a fail is to follow it with a win.