In our Meet the Builder video series, Julian details great uses for his favorite Guidebook feature – the photo album.

For better or worse, when you purchase a service or a product you’re also purchasing its support. At Guidebook we always strive to be on the “better” end of that spectrum – and our two Stevie Awards for customer service seem to indicate that we’re succeeding.

Our Customer Success Associates are first-responders when it comes to helping clients use our product, but they also happen to be the masters of using it. That’s why we often refer to them as “Guidebuilders.” Today we want to introduce you to another one of our guide-gurus – Julian Spindell.

“Julian simply gets clients. No matter who he’s working with, Julian has an innate ability to deeply understand the scenario and provide quick and meaningful solutions.” -Jacob Wittenberg, Customer Success Manager

Making jacks of all trades

Julian came to Guidebook by way of Minnesota, where he previously worked in customer support for a music software company. Some informational interviews with Guidebook Customer Success Associates soon turned into job interviews and Julian found himself driving down to Palo Alto with a new job.

For Julian, one of the most appealing aspects of being a Customer Success Associate at Guidebook is the fact that he gets to be involved in every aspect of client interaction – from troubleshooting to helping build guides. Supporting clients as well as using Guidebook daily keeps his workload constantly varied and always interesting.

“Everyone’s focus is on everything evenly. We all take on clients that require guidebuilding services in addition to handling support tickets.”

While helping clients, Julian has found that a familiar and interactive style works well. Often times clients can be on strict deadlines with top-down pressure to get things right. Julian takes joy in counteracting that with old-fashioned friendliness.

“I feel like the way to take the edge off is to let clients know that you’re a human being and that you’re there to help.”

In addition to delivering a refreshing level of humanity, Julian also finds it’s best to allow clients to work directly with the product while he helps them understand how to use it.

“You can watch stuff on a screen and follow along and that’s fine, but I feel like when you’re actually building guides yourself you’re more likely to retain that information. It also makes training a lot less daunting.”

From zero to hero

Julian had great success with this approach when he was working with a private university client who had a great idea for a guide but didn’t quite have a handle on how to make it happen. He got them started with a guide structure and some basic information and, with some coaching, they were able to build out a rich and useful guide together.

Now the university is making Guidebook guides frequently – and completely autonomously thanks to Julian’s initial guidance. Now he only sees the occasional email with small questions. Other than that, Julian says “now they know stuff that only a seasoned guidebuilder would know.” It’s a testament to Julian’s teaching abilities and the intuitiveness of Guidebook’s content management system. Not to mention, afterwards they sent him a handwritten thank you note. (It happens around here more often than you’d think.) 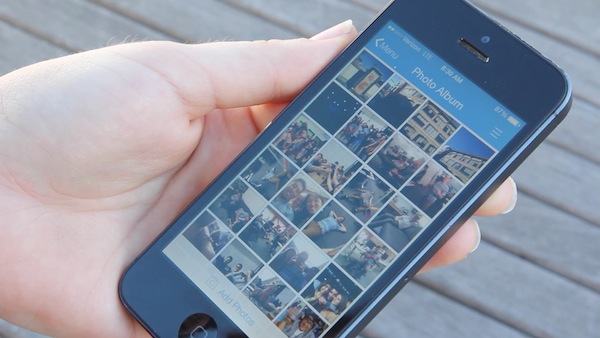 One of Julian’s favorite features of the guides he’s built is the Photo Album. It allows users to upload photos to a shared album. Julian finds that Photo Albums work great for guides that are built for trips or retreats – especially because you get an idea of what others were up to during the event and is something that can stay with you even after it’s over.

“Photo albums are a fun aspect of any guide and will make people want to use it more often.”

Julian appreciates Guidebook because it’s helping people deliver information in an elegant and useful way. He even took on a personal project to create a Guidebook guide for one of his favorite video games.

“Guidebook proves that it’s all about how information is organized. And Guidebook’s format makes it really easy to do just that.”