What to Expect When Getting Your Event Planning Certification

Getting an event planning certification can give your career a huge boost – but it doesn’t come without a lot of hard work. In addition to the day-to-day professional experience you’ll need to acquire to be eligible, a lot of time, preparation and studying come along with applying to be a Certified Meeting Professional (CMP). But just how much? And what is it like to go through the process?

The CMP program has been around since 1985. It’s an event planning certification sponsored by the Convention Industry Council (CIC). Being designated as a CMP shows that a planner has demonstrated a standard set of knowledge and skills in the meetings industry and adds a significant level of credibility to any resume.

When is the right time? 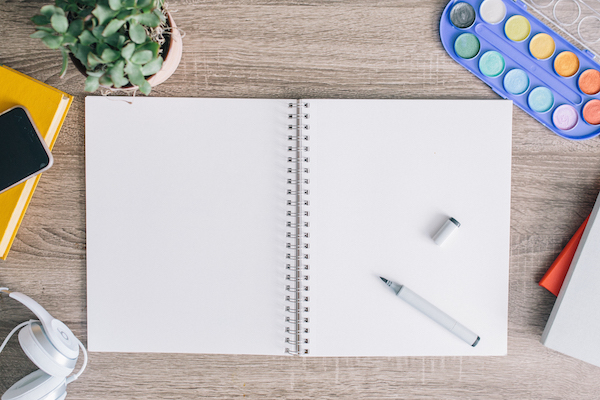 Unsurprisingly, one of the first considerations event planners find themselves making when thinking about becoming a CMP is whether or not now is the right time to make the leap. In some ways the CIC will determine this for you – there’s a minimum amount of experience that a planner must have to qualify for the program. (The CIC website lists all of the qualifications.) But in many ways, it’s also a personal decision.

Tiffany Vroman is a Catering and Convention Services Manager in Orlando, Florida. She has been working in events for over seven years and recently completed the process of becoming a CMP. For her, deciding to obtain the event planning certification was something she knew she was ready for. “It’s a time commitment and you really have to want to do it,” she said.

Tiffany had been discussing the option with her leader at work for almost a year. Between the two of them, it was a matter of coordinating when she could fit it into her workload. Tiffany felt that having the support of her leader made things easier in the long run. “If you let your leader know that it’s something that’s important to you, and they know you’re working on it, they tend to work with you to get you through it.”

Other considerations include the time and money it will take to complete the process. After paying for application and testing fees, expensive textbooks, and preparatory study groups and practice tests – a CMP can end up costing over $1,000. And Tiffany said that, on average, she spent an extra 5 hours a week on preparing for the exam over a total of three-and-a-half months.

TIP: Check with your employer to see if they might be willing to fit the cost of a CMP into their professional development budget. They may also have a program set up to reimburse you after you pass the test. Your continuing education, after all, benefits them too!

The overall process for getting your event planning certification is pretty straightforward – it’s all the details (and studying) that make it complicated. The outline however, can be summed up easily. When you decide it’s time to apply, you’ll gather your application materials and complete the application. Within 6-8 weeks, you’ll receive approval from the CIC. If, for some reason, your application is denied, you have 14 days to appeal. You’ll then pay your exam fee and schedule your exam sometime within one year of being accepted. Assuming you pass the exam, it could take another 8 weeks to get your results. 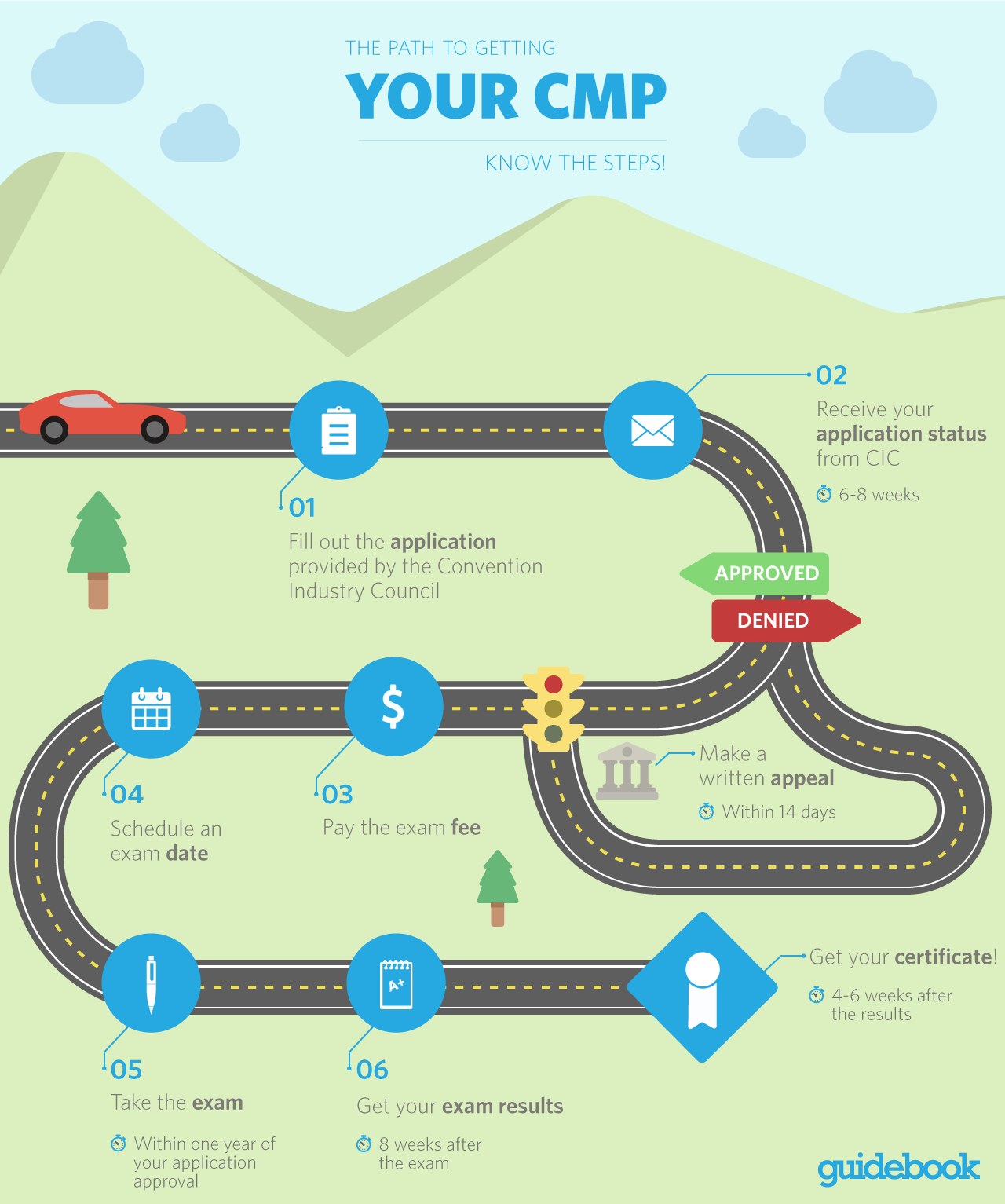 Let’s take a closer look at the two main steps – the application and the exam.

The CMP application itself is 7 pages, but Tiffany says hers ended up being over 25 after attaching all the necessary information. You’ll want to have two major things squared away before event attempting the application.

First of all, make sure you have the minimum amount of experience. You must have been working professionally for at least 36 months if you are without a degree in meetings, tourism or event management. If you do have a degree, the requirement goes down to 24 months of work. You can also apply if you have 36 months of professional teaching under your belt in meeting event, exhibition, or hospitality/tourism management.

TIP: CIC measures “clock hours” in 15 minute increments, so it’s totally valid to list a course as 1.25 or 1.5 hours. Keep track because every little bit counts!

It’s the main event! The CMP exam will evaluate your application of all the knowledge you’ve acquired through experience, professional development and your hours of studying.

How you choose to study is, of course, largely a matter of personal preference. The fact that you need to study, however, is an undisputed fact. Once you get the texts that the exam covers, it’s up to you how you’ll ingest and retain the info contained in them. The CIC offers practice exams on its site (for a fee), PCMA has an online test prep, and often local CMP’s with an interest in the organization will host study groups.

Tiffany’s exam prep lasted for about three-and-a-half months. During that time, she read about 3-4 chapters of the books in the recommended reading list per week while also attending a local study group. With that amount of preparation (and a bit of an extra push during the two weeks leading to the exam), Tiffany said she felt prepared.

For Tiffany, her study group was an invaluable resource. “The test is all application, and when you’re in a study session you can play off each other’s experiences and really get the most out of it. I remember their situations helped me remember certain topics better.”

Like Tiffany says, the exam is largely application. Little of the knowledge on the test has to do with memorizing facts, which is why CIC puts such an emphasis on real-world experience. Talking to other experienced CMPs and taking practice tests will make sure you’re prepared to complete the sorts of analysis required for acing exam questions.

Exam day itself can be a little intimidating if you don’t know what to expect. The CMP exam is given at an approved testing center and other people will be there taking other tests along with you. You’ll have to go through a check beforehand and your belongings will be left in a locker outside the testing room. The exam itself is given on a computer and CIC says it takes about 3 hours to complete. Tiffany said it took her about 2.5.

TIP: Prometrics is the company that the CIC administers the CMP test through. They offer an option called Test Drive for folks who would like to scope out the situation before the day of the exam. It might be a good idea if you’re uncomfortable in less-than-familiar environments.

The benefits of event planning certification

For many corporate career paths, getting an event planning certification is necessary to continue advancing up the ladder. It means quite a bit of extra work, but is also likely that they’ll be willing to work with you to make the time necessary for you to become a CMP.

For Tiffany, investing in becoming a CMP has already begun to pay off. When she’s working with other meeting planners, they see the CMP and they “automatically have a level of trust,” she says. “It makes it easier to be more successful when developing a relationship with your client.”

Her advice to someone starting the process? “Make sure, more than anything, that you understand the time commitment. Definitely start studying earlier rather than later. Break it up because it’s too much to understand all at once.”

If you’re ready to take the leap, you can find detailed information and handbooks on the CIC website that will step you through the process. Good luck!