Use an app to sync your team at a large festival

Each year, the global advertising industry descends on Cannes, France for a week-long festival of awards, galas and a celebration of all things advertising. The Cannes Lions International Festival of Creativity is a must-attend for any international advertising or media agency and Mindshare is no exception.

The person behind Mindshare’s presence at Cannes Lions is Paula McCarthy of the London headquarters’ global marketing team. As Mindshare’s largest industry event of the year, it’s her responsibility to coordinate the 100+ international employees attending the festival in addition to running an independently hosted hospitality suite, Club Mindshare.

Since Cannes Lions is the perfect chance for Mindshare executives and employees from around the world to connect with their clients – as well as with each other – the hospitality lounge serves as a refuge with meeting space, a quick bite, and reliable Wi-Fi away from the frantic hubbub of the festival itself.

Getting organised with mobile

One of the givens of Paula’s job is a barrage of emails and phone calls before and during the festival. There’s always a lot of need-to-know information, but not a great way of distributing it. It usually resulted a series of emails that attendees either ignored or struggled to find in their crowded inboxes. This year, Paula figured out a better way and created her own mobile app using Guidebook. 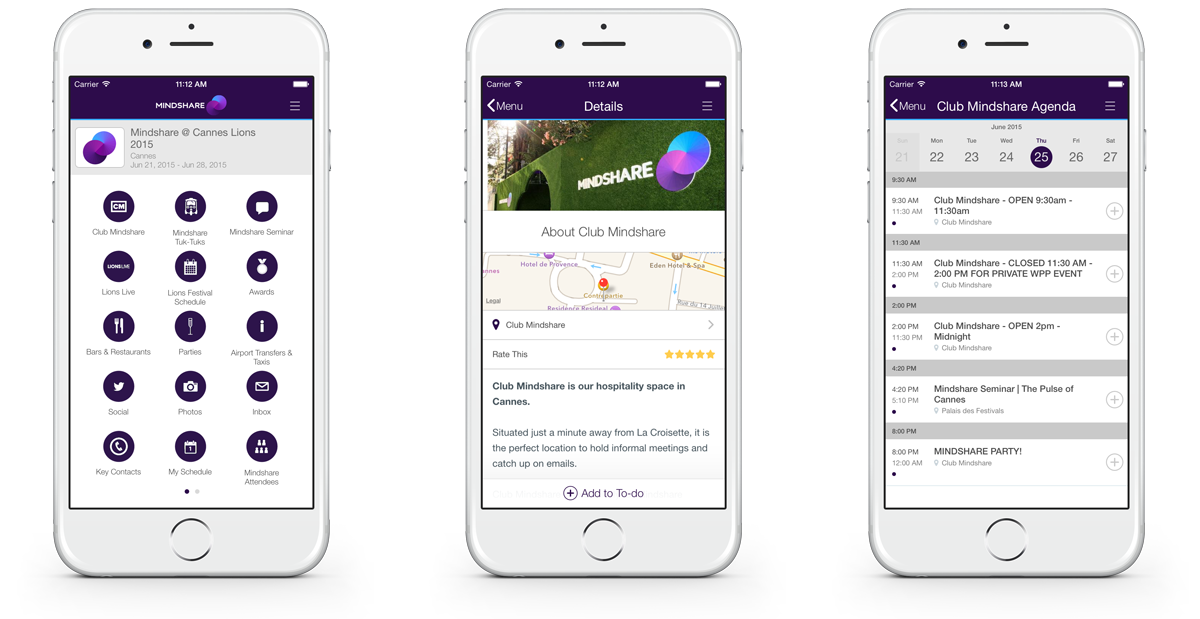 “The app saved me sending umpteen emails that people didn’t read. Instead of a big scrolling email full of information, it’s an easier-to-digest way of finding the bits of information that you want to know.”

Paula’s co-workers had used Guidebook to create an app for their in-office annual festival,  Huddle, and she was immediately drawn to the benefits of delivering neatly organised information directly to people’s mobile devices. It didn’t take much of a leap to see how she might be able to make an organisational use of the same platform.

The Mindshare at Cannes Lions mobile guide contained everything that would have been sent out in a series of emails and posted on an intranet in years past. Mindshare attendees were able to quickly find information about Club Mindshare, its schedule, Mindshare’s other festival activities, as well as travel information, key contacts, and tips on surrounding hotspots. It served as a perfect guide to the week and, best of all, there was never any question as to where to find the information.

“It helped reduce the number of questions I usually get because people were able to find that information easier for themselves, rather than scrolling through loads of emails,” said Paula. And with Guidebook’s metrics, she was able to determine that all of Mindshare’s attendees made use of it (along with some of their clients to boot).

Perhaps most importantly, a guide like this shouldn’t be time consuming or overly complicated to make. The point, after all, is to make communication simpler. Paula said, “I found it quite easy to create. The most time consuming part is gathering the information, not putting it in the CMS.” Thanks to Guidebook Builder’s simple user interface and a little help from the friendly support team, Paula actually reduced her communication headaches, as opposed to compounding them.

For other professionals looking to communicate with their teams at a big festival or trade show Paula said, “I would definitely recommend it. I found it did exactly what I needed it to do, and quite a few people said they thought it was great.” Chalk that one up as a win for Mindshare’s Cannes Lions attendees and a definite win for Paula’s peace of mind over the course of a hectic week.