Guidebook is pleased to announce the State of Mobile Event Technology Annual Report 2014.

The Event Technology Report is based on completed surveys from more than 500 event professionals who use mobile event apps year-round for many kinds of events: ranging from 10-person meetings to 130,000-attendee conventions.

The published event tech report provides an in-depth look into the benefits and concerns related to using mobile event apps, true costs and ROI, new technologies, and the primary concerns event planners are facing in 2014.

The real cost of an event app is only 1.2% of the budget for each attendee, on average. In contrast, printing paper programs is more than 2x the cost.

Event apps are making planners better at their jobs 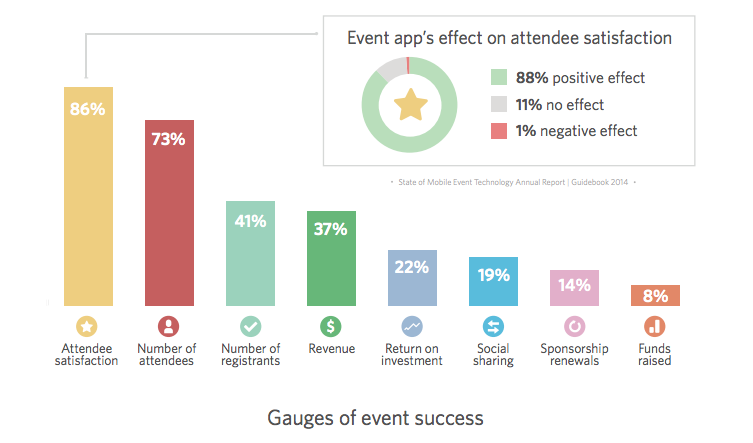 Planners are getting a return from event apps

Of respondents to whom the question applied, 91% said that their adoption of mobile event apps has produced a positive return on investment.

Eco-friendly events are a focus for most planners

Event app promotion is a concern

More than half of respondents–53%–reported that they feel they are not doing enough to promote their event apps, suggesting a need for education and resources to make it easier.

Planners are worried that their competitors have an edge with budget (28%) and access to new tech (28%). Their most-cited overall challenges are budget (45%) followed by staff concerns (9%).