NC State Shows You How to Create A Homecoming App

Ask the Homecoming team at North Carolina State about the national and internal awards they’ve won. They’ll tell you they started being recognized around the time they decided to create a homecoming app!

NC State’s homecoming is exceptional in a lot of ways. It’s student-run, and the students of the Alumni Association Student Ambassador Program (AASAP) organize 42 events over the course of five days. In 2013, they were awarded the nation’s most “Outstanding Tried and True Program” by CASE.

“The award involves multiple years of continued progress,” says Josh Privette, Coordinator of Student and Young Alumni Programs for NC State. Josh adds that the commitment to adoption of technology–the decision to create a homecoming app–along with service to the community were the primary reasons given for the win.

Why Should You Create a Homecoming App?

Homecoming is one of the busiest times of year on campus. Smooth programming relies on the ability to share information quickly, make changes on the fly, and engage the students and alumni. The AASAP team spoke with us about how to make the most of your homecoming app.

It Works Best if Everyone Downloads It

The NC State team is committed to making sure students and alumni know about the app. In addition to including download instructions in emails, posting them at the event sites, and sharing on social media, they use some methods that are even more… compelling.

“We give out t-shirts at our kickoff event,” says Laura Sandtner, Homecoming Director. “But only if you’ve downloaded the app and you show it to us on your phone. We actually won’t give out a shirt unless you can prove it!”

Laura knows that it’s not just enough to create a homecoming app. Its value compounds with each dedicated user. Even when it’s not homecoming season, the team told me, they use the push notifications feature in the app to share important updates with their thousands of users. 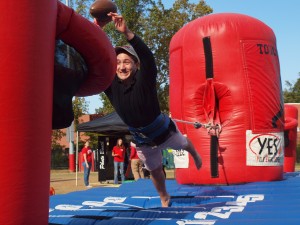 Align The App With Your Other Green Initiatives

Multi-day campus events are notorious for producing a lot of waste. Organizations running these events are setting goals to reduce the impact on the environment–and taking the step to create a homecoming app is instrumental.

“We eliminated printing almost entirely when we went with an app,” says Josh.

You can use your app to showcase your eco-friendly events, too. Laura told us about a large effort during the 5-day homecoming season that would traditionally have produced a lot of waste: Wear Red, Get Fed. The homecoming team works with local food vendors to donate meals. 1,000 students wearing NC’s colors can eat for free each day.

This year, the Wear Red, Get Fed team moved to compostable utensils and plates and used the homecoming app to draw attention to this daily event. The work to go green paid off. The homecoming festivities earned a university-wide “certified green” recognition–the first time this highest-level award has been given to a student-run organization.

The team worked to improve environmental impact across the board, but, as Josh says, “The biggest reason was our homecoming app.”

Listen To The Users

The team makes sure to stay aware of what students are saying about the homecoming app. Anna Sossaman, the Co-Director, collects feedback about the features students like: Maps help them find their way around the many activities throughout the week. Personal schedules help alumni and students stay organized. And everyone likes the push notifications.

“Without the app, students wouldn’t even know there was a cupcake war!” says Josh.