PAX Prime, an enormous gaming festival, has used the Guidebook platform to build an event app for the past three years, and has worked with Guidebook to include some element of gamification each time. 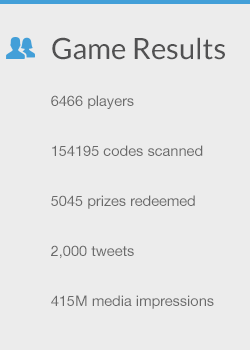 This year Guidebook, PAX, Mountain Dew and Doritos worked together to build a native event app game that took attendees through the convention center and around Seattle, hunting for QR codes using in-app clues. Participants could spend their QR “points” in a marketplace for prizes ranging from quirky to highly covetable: exclusive t-shirts and hats, sound bars and gaming headphones.

Attendees could access the event app game through the homepage of their Guidebook app, which also gave them information about the event and its schedule, allowed them to find their way around the venue and the city with interactive maps, let them build personal to-do lists and check them off upon completion, and access many other engaging and useful features.

The complex scavenger hunt game culminated in a live auction event on Sunday, September 1 2013, where participants who had amassed thousands of points could bid on and win an Xbox One entertainment system. 30 of the as-yet-unreleased gaming systems were auctioned off for points.

And Sunday’s live auction in Seattle was only the beginning. The goal of the PAX launch campaign was to generate awareness for the “Every 2 Minutes” online auction experience starting this fall, in which the Mountain Dew and Doritos brands will give fans a chance to bid on Xbox One entertainment systems every two minutes through nightly auctions.

A Game For Gamers

Guidebook offers a basic scavenger hunt gamification option to all customers, but for PAX Prime 2013, the sponsors needed something that could capture the attention of real-life gamers and that was complex enough to warrant the big-ticket prizes.

Additionally, we knew that thousands of people would participate and that this demographic tends have a high level of technical knowledge. The event app game needed to provide satisfaction to players at all levels: a player who wanted to focus more on the event attractions and just snap a few QR codes as they came across them, and a player whose dedication to winning that Xbox would send him all over the city, puzzling over clues and thrilling in the chance to win big. The event app game also needed to be cheat-proof, because the stakes were so high.

Luckily, several of the members of Guidebook’s development team fall into the category of ‘gaming enthusiasts’, so they were able to analyze the projected demographic, consider the value of the prizes offered, and come up with a truly legendary event app game with enough challenge to satisfy every type of player. They tackled the issue of keeping the game fair with an ingenious online/offline point collection system. And they worked closely with the sponsors to make sure every opportunity was taken to encourage participants to socially amplify details of the event and the game.

Throughout the event weekend, those who downloaded the Guidebook-powered official PAX Prime mobile app were prompted to seek out Every 2 Minutes QR codes hidden throughout the Seattle Convention Center—on walls, inside booths, on characters walking the event floor, and in popular Seattle landmarks including the Space Needle and Pike Place Market—bank points, and redeem them onsite for prizing at the Mtn Dew/Doritos Marketplace or use them as currency for a live auction happening at the event.

Nearly 6,500 participants snapped the 100+ QR codes over 155,000 collective times, as the app effectively hijacked PAX for three straight days. At the marketplace, a team of brand ambassadors helped thousands of attendees exchange points collected via the event app game for rewards in absolute real time. Lucky participants walked away with everything from exclusive t-shirts and hats to Polk Audio sound bars and Turtle Beach gaming headphones. In all, they redeemed over 5,000 prizes—but that was just a preamble for the live auction event that capped off the weekend.

A Live Auction With Over 1500 Participants

On Sunday night, over 1,500 PAX attendees flooded into the venue’s queue room for a live event held by Mtn Dew & Doritos, where they were promised a chance at bidding on—and potentially winning—30 Xbox One prizes to be delivered direct to their doors, with six winners receiving their prize before the national product launch. 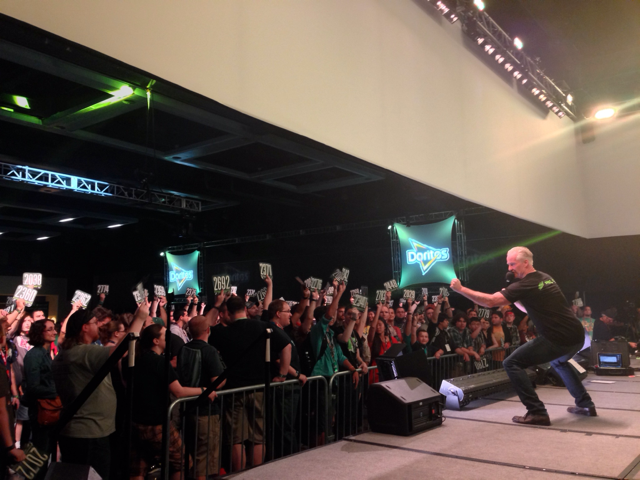 A professional auctioneer belted out “One thousand, two thousand, do I hear three thousand” as participants fanatically waved their bidding cards—and 30 times throughout the night, a loud “Sold!” resonated over the PA. In addition to bidding on 30 entertainment systems, thousands of attendees enjoyed complimentary food and beverages and redeemed their remaining points at the marketplace as a DJ played gamer-centric tunes all night.

During and after the weekend, Twitter erupted with nearly 2,000 tweets reaching 5,000,000 followers. Close to 415,000,000 media impressions were generated, resulting in a surge of Every2Minutes.com signups prior to the online program’s official launch.

Doritos, Mountain Dew and PAX were highly satisfied with the results of the Guidebook-powered event app game. They did an incredible job understanding their customers, providing a game experience tailored to them, and making the whole thing exciting and fun. It’s easy to include a game in your app. Looking for tips? Check out this article. Event App Gamification: Why It’s Not Working For You.

Want to build a mobile app with a game in it for your next event? Get started by building a free Guidebook guide!