How to Make the Best Fan Expo App for your Convention

aka “How to Give Your Attendees What They Want”

Whether you know it or not, Guidebook’s roots trace back to a fan expo app. Essentially, our company was built around providing a much needed tool to cons and expos. For years we’ve been supporting PAX and its multiple incarnations around the world and, as we’ve grown, so has the range of cons making us their official app.

Now that we support everything between some of the the largest fan gatherings in the world and hundreds of small (but mighty) regional cons, we’ve learned some lessons along the way about what makes for a useful fan expo app. So as you’re making decisions when it comes to digital content – keep the following things in mind.

Fan expos and cons are all about connecting audiences with the things they love the most. In the past, paper schedules and programs were fans’ key to making sure that they hit the panels they wanted, left plenty of time for the autograph line, and never missed a photo op. The problem was that, in many ways, the thing that was supposed to help unlock all of that information was often acting as an impediment.

Paper schedules and programs make great mementos, but at the event itself they’re often cumbersome, they get torn up, and it’s not exactly easy to find the information you’re looking for immediately. Whatever you choose as your fan expo app, you should definitely make sure that the layout, the features, and the content all reduce the friction between fans and the things they want to find most.

Michele Maakestad helps to organize Gamicon, a gaming convention in Iowa City. She’s been using a fan expo app for several years and says, “The main benefit for our attendees is that they can see the schedule, pick their games, and set up reminders so that they can customize their convention experience.” Seems simple enough – but when you think of it, those three actions are a far cry from the days of hunting through a paper schedule, circling the sessions to attend, and then creating your own spreadsheet agenda for the length of the con. 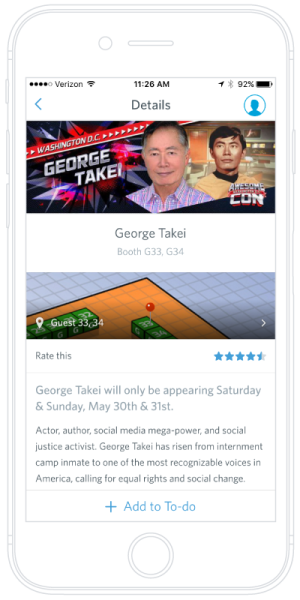 As a fan expo organizer, one thing that will always be a constant is the last-minute, unexpected changes to the schedule and program. Back in the days of paper, organizers were reduced to posting disappointing signs on doors or making awkward announcements in the lobby. Now it’s as simple as updating the schedule on the back end of your fan expo app and sending out a push notification.

Ben Penrod of Awesome Con finds the ability to change the program in an instant the most beneficial part of having an app. “We can change things on the fly. We also have a printed program, but it’s tough when we have schedule changes because obviously something that was printed in advance can’t be changed.”

Push notifications can give you a lot of great power (and great responsibility – sorry…I had to). Messaging all attendees instantly within the fan expo app gives the organizer a chance to call attention to certain sessions, change the flow of traffic, or even generate buzz by offering up new or exclusive information.

Even when a venue’s wireless connection is acting up, an app gives your attendees a chance to be current. Marvin Vinluan of Otakon says, “The biggest plus is that even when people don’t have internet – or the cell networks choke on the crowds – the last known information is still accessible offline in the same format.” 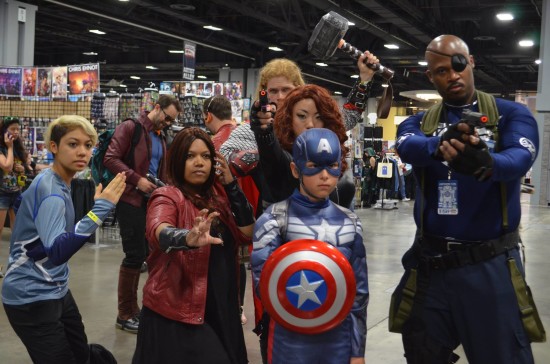 Perhaps the best part of using a fan expo app (especially a DIY platform like Guidebook) is that you can actually reduce the time and money that you’re spending on your attendees’ organization tool.

Michele says preparing the schedule within the app is actually a fairly easy process for Gamicon. “We schedule our events using an Excel spreadsheet, and Guidebook makes it VERY simple to upload all our events at once.”

The quality of your guide’s content can also be as deep and as attractive as you want it to be. Attendees will get even more out of the app if it’s packed with photos and interactive features like peer-to-peer messaging and surveys.

For a lot of small, regional cons the price of an app can also make a huge difference. Consider looking for a fan expo app whose pricing structure grows with the con itself. Some providers offer freemium models that cap at a sufficient download number, but still carry enough attractive features to make it worth it.

Most importantly, what do the fans think?

Your con is a community and any fan expo app that you’re providing them should be a part of strengthening that community. Always keep this in mind when you’re evaluating your options. Using the app’s metrics and surveys, you can continue to improve both your event and your app year over year.

Check out what fans at Star Wars Celebration said having a useful fan expo app meant to them:

At the end of the day, an app should help open the lines of communication between you and your attendees. As Ben from Awesome Con said, “We wanted an app because we wanted to be able to inform AND communicate with our attendees during the event.”

Want to create your own app for an expo, con, or fan gathering? Guidebook is a favorite among fans – especially because it’s quite possible you can use it for free! Get started now with a special app template we created especially for a fan expo app.